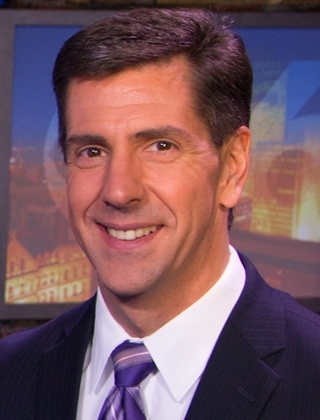 Chief Meteorologist Steve LaPointe has engaged CBS 6 viewers with accurate weather forecasts, critical severe weather coverage, and special educational weather programming for the past twenty five years. You can find Steve's reports and forecasts regularly on CBS6 news Mondays through Fridays on the 5, 5:30, 6 and 6:30pm newscasts as well as the 10pm newscast on the CW15 and again at 11pm on CBS6. If you miss him there you can catch his text and video forecasts on cbs6albany.com.

Steve`s interest in the weather began as a young child living in Big Flats, NY outside of Corning.

"My folks knew there was something different about me when I kept running outside during thunderstorms."

Through experiencing first hand one of the most devastating floods on record in the Northeast, the flood of June 1972, caused by the torrential rains from former Hurricane Agnes, as well as Hurricane Belle in southern New England in 1976, and the blizzard of `78 in southern New Hampshire, Steve`s interest in weather blossomed.

"Big storms have always fascinated me and still do today."

Steve earned a BS degree in meteorology from Penn State University in 1989 and began his career in television immediately after completing school with a start as an emergency fill-in guy for WMUR-TV in Manchester, N.H. close to his hometown of Hollis. Within two weeks after his fill-in experience at WMUR Steve began a full-time weather/reporter job at WSAV-TV in Savannah, GA in February 1990.

Steve joined CBS6 news on April 22, 1991 as the morning and noon meteorologist first working with Jack Aernecke, and then Ed O`Brien. In February 1995, Steve was promoted to his current position as chief meteorologist.

Some of Steve`s accomplishments over the years at CBS6 include the first locally produced forecast product on the Internet in the Albany-Schenectady-Troy market in February, 1996. Steve developed and continues to maintain a market exclusive online historical weather database which includes daily climate information and significant storm summaries for the region centered on Albany dating from May 1988 to the present.

He designed and administers the innovative and market exclusive online WeatherNet 6 weather watcher project (http://weathernet6@wrgb.com) which went live in 1999 and continues strong to this day with over two hundred volunteer weather spotters reporting conditions from the local area daily.

"WeatherNet 6 allows a volunteer spotter force to post weather observations for their communities on the web site, making the data available to us. forecasters at the National Weather Service and the general public 24/7, providing valuable local information allowing us to improve local forecasts and weather coverage."

In 1993, Steve was named in a station award given by the New York State Associated Press for outstanding newscast and coverage of the blizzard of 1993. Steve was also named in a New York State Associated Press Award for best newscast coverage of the 1995 Memorial Day severe weather outbreak which generated the devastating family of tornadoes that hit Hillsdale, NY and Great Barrington, Massachusetts. In the spring of 1999 Steve was nominated for a New York State Emmy award for outstanding on-camera achievement for his non-stop coverage of the Mechanicville-Stillwater tornado outbreak on Memorial Day 1998, coverage that was credited with keeping residents informed and safe during the event.